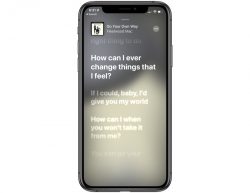 In an interview with WIRED, Apple Music head Oliver Schusser has revealed that Apple has a team of employees listening to songs and transcribing the lyrics to ensure they are accurate for iOS 13’s new real-time lyrics feature:

In probably the most bizarre example of Apple spending to get the experience right, Schusser says that Apple has “a team of people listening to music and transcribing the lyrics” to ensure they’re accurate enough for Apple Music’s new time synced lyrics feature; “we don’t get them from the usual sites.”

With iOS 13’s real-time lyrics feature, each verse appears in time with the music so you can follow along as you listen. To jump to a certain verse, just scroll and tap any line. The feature is not available for all songs.

The interview contains a few other notable tidbits from Beats 1 radio host Zane Lowe, including the possibility of the Apple Music Festival returning in the future and “some big new names” who will accompany Ebro Darden, Julie Adenuga, Matt Wilkinson, and himself as Beats 1 hosts in the future.