Google Chrome is without a doubt one of the biggest memory hogs on Windows, and the more you use it, the more RAM it eats up on your device.

Right now, as I’m typing this, I have six active tabs in Google Chrome, and the RAM usage in Task Manager on my Windows 10 PC pretty much speaks for itself: the browser uses no less than 3GB RAM without any playing media.

Google knows it very well that Chrome needs better resource management and, in fact, the company has already released several tools to help reduce the impact it has on system performance.

Back in 2015, for example, Google rolled out a feature whose purpose was specifically to improve the way the browser allocates resources for each running tab, eventually being able to step in and cut tabs that require too much RAM.

Called Tab Discarding, this feature monitored tabs and suspended the ones not being used to make sure they aren’t active or reloaded in the background. This helped prevent resources from being allocated to the tab without the user needing it, and at some level improved the system performance when running low on memory.

Google is now ready to go a step further with another similar feature called Tab Freeze.

As discovered by TechDows, this new tool works similarly, but gives users the power to configure how the whole thing works, and more importantly, for how long the tabs are suspended.

This new feature is part of the latest Canary build, and you can give it a try by enabling it from the flags screen.

To do this, first of all you need to make sure you’re running the most recent Chrome Canary release. I’m testing this tutorial on build 79.0.3941.0, so if your version is any newer than this, you’re good to go. 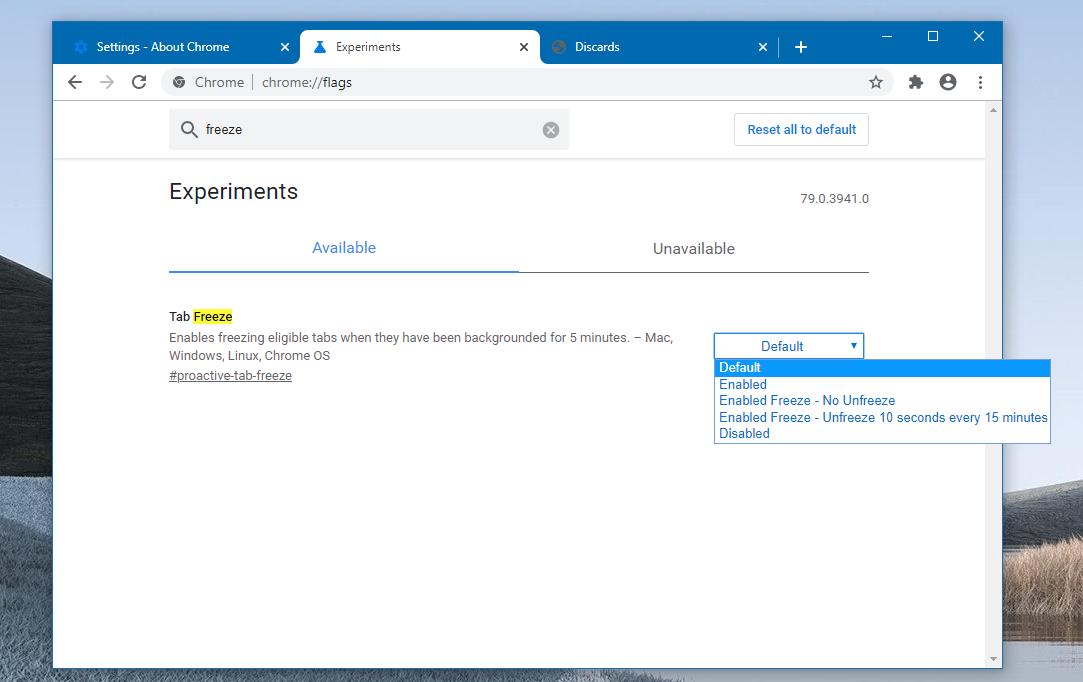 Next, fire up the browser and in the address bar type the following code to access the flags screen:

Next, search for the following flag:

The following shortcut lets you reach this option faster if you copy the code and paste it in the address bar of Chrome Canary:

As the flag description notes, it “enables freezing eligible tabs when they have been backgrounded for 5 minutes.”

There are five different options for this flag:

Enabling the flag means Google Chrome will automatically freeze the tabs that have been inactive in the background for 5 minutes, while the third option lets the browser freeze them without unfreezing at a later time.

Once this feature is enabled and running on your device, you can see the current status of the tabs and manually freeze or unfreeze tabs by typing the following code in the Chrome address bar:

At this point, there is no ETA as to when Google could be bringing this feature to everyone out there, but it’s pretty clear that tab freezing is still in its early days and further refinements are still needed. This is actually the…