Huawei is no longer allowed to use the licensed Android version or Google apps, but this doesn’t necessarily mean the Chinese tech giant can stop doing what it knows best.

And by this, I mean focusing on the two categories of products that it really loves: high-end devices and Apple copycats.

Today, it’s the turn of Apple’s iPad Pro to meet its Huawei lookalike, as the Chinese company took the wraps off a MatePad model that comes with a totally unexpected name: MatePad Pro.

The flagship tablet not only adopts the iPad Pro naming approach, but it also copies its design. From certainly angles, MatePad Pro looks just like the iPad Pro, although it’s worth mentioning that Huawei did focus a little bit more on smaller details like bezel size.

MatePad Pro comes with a 10.8-inch 16:10 display with a screen-to-body ratio of 90%, so yes, the Chinese did a terrific job when it comes to shrinking bezels and increasing the available screen estate.

As for the other specs, power comes from Huawei’s in-house Kirin 990 chip paired with a maximum of 8GB of RAM and 256GB of storage. Just as expected, there’s a large 7,250 mAh battery that features all kinds of gimmicks, such as reverse wireless charging, but also 40W supercharging and wireless charging.

Unsurprisingly, Huawei is selling the MatePad Pro alongside a new stylus which looks nearly the same as the Apple Pencil.

The tablet Is powered by Android 10 with EMUI 10 customization, but without any Google apps after the company was banned from working with the American company back in May. MatePad Pro will go on sale in China next month from 3,299 yuan ($470), and a 5G version is expected next year. At this point, there’s no word on a potential international version given the lack of Google apps. 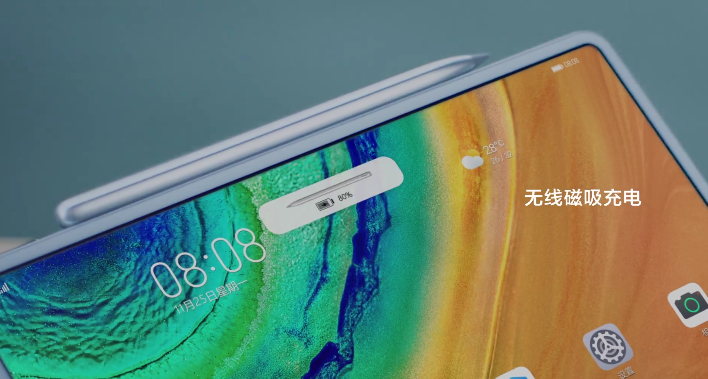