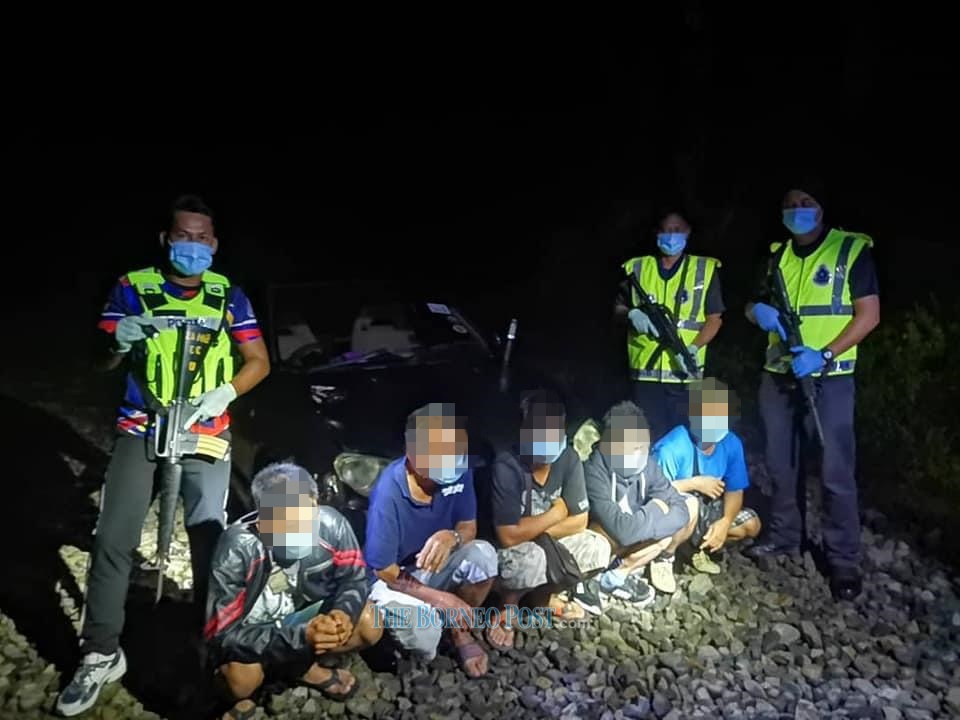 The suspect (second left) together with the four illegal immigrants being rounded up after their arrests at an oil plam plantation in Bunan Gega, Serian.

KUCHING (Mar 6): A local man was arrested after he was caught transporting four illegal immigrants for a fee of RM500 each inside his car at an oil palm plantation in Bunan Gega, Serian around 8pm on March 4.

General Operations Force (GOF) Sarawak commander SAC Mancha Ata said the suspect also admitted that he was working with another ‘tekong’ (boat skipper) in Indonesia who would plan the time and location of the pick up of the illegal immigrants.

“The immigrants would first enter the country via a ‘jalan tikus’ (illegal pathway) and wait at a designated location for the suspect to arrive with their transportation,” said Mancha in a statement today.

During the checks, none of the immigrants managed to produce any form of legal travelling documents.

The suspect was arrested under the Anti-Trafficking In Persons and Anti-Smuggling of Migrants (Atipsom) Act 2007 while the illegal immigrants will be investigated under Section 6(1) of the Immigration Act 1959.

All six suspects will also be investigated under the Prevention and Control of Infectious Diseases Act 1988. They were handed over to the Serian district police for further action.

In two separate cases, the GOF also came across and ordered four illegal Indonesian immigrants in Tebedu and Sematan to return to their own country on March 4.

“In Tebedu, a GOF team stumbled upon two women at a Jalan Tikus near the Tebedu ICQS around 3.30pm,” said Mancha.

He added that both failed to produce their travelling documents and was ordered to return to their own country.

Later that day in Sematan, a GOF team came across two men inside a house that was build inside an oil plam plantation around 6.40pm.

Checks were conducted on both men which showed that none of them have any valid travelling documents.

“It is believed that the house acts as a transit point for illegal immigrants who had entered the county illegally,” he added.

Both cases are being investigated under Section 6(1) of the Immigration Act 1959 and the Prevention and Control of Infectious Diseases Act 1988.