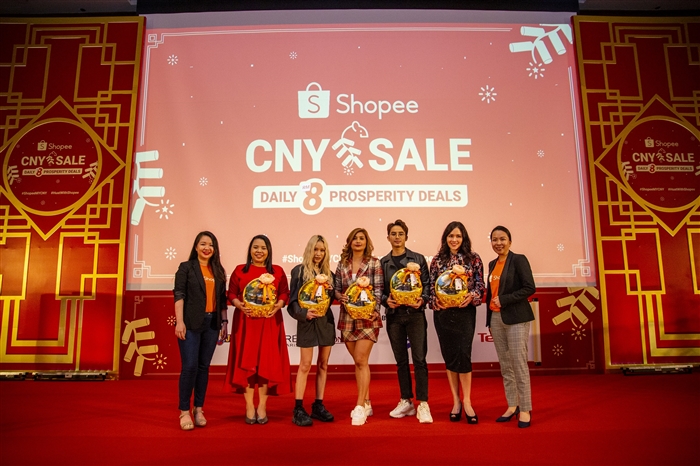 Shopee welcomes 2020 with its Chinese New Year (CNY) Sale, setting the tone for a greater year of deals and discounts for Malaysians. Running till 28 January, the campaign features a wide array of new products, RM18 free shipping, a suite of new services as well as new games and entertainment – all to be enjoyed both on and off the platform.

Users will not want to miss the RM8 prosperity deals on CNY Hampers, 24-can Coca-Cola, Tefal Cookware set, Cheongsam, Khind stand fans and more. Premium gold bars are also up for grabs at RM1. Some CNY offerings to look out for include Mandarin Orange-flavoured KIT-KAT, Eu Yan Sang Bird’s Nest Mouse Gift Box and exclusive pineapple flower for prayers.

Shopee is all about giving users a good celebration, and its offline deals from F&B to services, hotels and theme parks via the Reloads, Vouchers and Bills feature on the App are must-haves. Go easy on the wallet during big reunions with discounts when dining at Shopee’s new merchants’ outlets – Michelin-starred Hawker Chan, Dragon-i, Purple Cane, SouperTang and Tony Roma’s. Let the experts groom you by purchasing vouchers to beauty services or get help with cleaning services without breaking a sweat. As many will be travelling, getting the vehicle serviced is a must! Basic servicing options from changing tyres to a full car maintenance are available with the click of a button. Also, keep the little ones safe by getting child car seats from as low as RM88.

Looking to upgrade the home to impress relatives? Participating sellers on Shopee are upsizing the huat by guaranteeing Malaysians the lowest price on washing machines and dryers, air conditioners, refrigerators, televisions, ovens and more. Users in Peninsular Malaysia are in for an even bigger treat as they can get all these items shipped to them, free of charge, from now until 21 January.

Shopee is also expecting an influx of orders this CNY, especially for bulky items like dining sets, wardrobes, beds and sofas. As these items tend to be heavy, the appointment of third-party logistics partner, Ninja Van, is timely as they can handle shipments of up to 90kgs.

Amping up the CNY fever, Shopee introduces CNY-themed games like Shopee Ang Pow and Fortune Sticks, all with vouchers worth a total of RM88,000 and more than 18 million Shopee Coins to be won. For those who want to learn about their fortune, family, home, career, love and health can catch Fengshui Master Jane Hor on Shopee Live at 12.30pm on weekdays from now until 17 January.

With so much to look forward to, shoppers will still want to save the date 13 January for the Huat Ah! Huat Ah! Sale where the platform is offering unbeatable promotions from all categories, upsized Shocking Sale, and a 10gram Gold Bar worth RM2,250 for just RM1 in One or Not.

The Shopee CNY Sale is supported by brands such as Nestlé, Unilever, Vinda, P&G, Watsons, Enfagrow, Friso, Realme, Photobook, and Tesco, and partners such as FPX, RHB, Standard Chartered, United Overseas Bank, amongst others.

The efforts Shopee has pulled together to curate this CNY campaign is part of its strategy to maintain its strong growth momentum, having closed an impressive 2019. Shopee penned record-breaking achievement after achievement. Key highlights as follow:

“We recorded stellar performance on all fronts of our business throughout the year, with robust shopping activities during the second half of the year. This was supported by major shopping festivals such as 9.9, 11.11 and 12.12. Our volumes have been steadily increasing campaign to campaign. Hence, the appointment of Ninja Van was imperative in order for us to ensure that our users are able to get their parcels on time,” said Ian Ho, Regional Managing Director of Shopee.

Commenting on the industry’s landscape, Ho added that there is a lot more potential for the e-commerce industry in Malaysia to grow. “Seeing as e-commerce contribution to total retail is still below 3%, and very much at its infancy, there is a lot more work to be done. We remain committed to this market and expect 2020 to be another exciting year as we unlock more opportunities and identify solid partnerships that would be beneficial to retailers, consumers and the economy.”